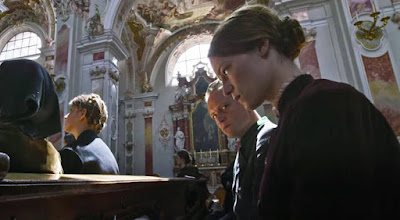 A Hidden Life Terrence Malick's latest masterpiece is, like all of his films, sublimely, singularly beautiful, but this might be his first film that can rightly be called "timely." His recent forays into contemporary culture, whether great (To the Wonder), muddled (Song to Song), or both at once (Knight of Cups), tell us almost nothing of particular interest about the present world. His apparent distaste for, and/or tenuous understanding of, things current (viewed, at times, like artifacts of an alien society) awkwardly undercut his focus on the poetic, the timeless, the essential. In his return to the past––specifically to the perilous period of the Second World War, which he last explored two decades ago, in the war's Pacific theatre––Malick recovers something from the story of the Austrian conscientious objector Franz Jägerstätter that, through its timelessness and universality, resonates powerfully in the dangerous, murky conditions of the present.

Malick evidently found Scorsese's Silence seriously challenging. A Hidden Life considers a similar kind of spiritual crisis, though (perhaps, surprisingly) in an ostensibly less theologically complex manner. Matters of good and evil and of free will and compulsion (problems at the very heart of his oeuvre) are no less thoughtfully explored by Malick, but there are fewer nagging shades of grey here than in Silence. Instead, across its generous three-hour runtime, A Hidden Life immerses its audience in this kind of spiritual crisis as wholly as it immerses us in the Edenic beauty of Jägerstätter's Alpine village. Its simplicity is deceptive: if resisting and rejecting what we sense is truly wrong is something that is easy and obvious, the film asks, then why do we not all fully and unambiguously do so all the time? What evils do we just tacitly accept? Is being able to resolutely say "No" a matter of conscience, or courage, or the mysteries of divine grace? Jägerstätter has in fact been beatified by the Catholic Church, and A Hidden Life might be accurately termed a modern hagiography. Yet, as presented by Malick, Jägerstätter is a saint whose example speaks poignantly and directly to the insidious forces of nationalism, authoritarianism, and populism gaining ground again today.

Lost Course Another three-hour, genuinely monumental work, no less urgent than Malick's, although in many respects very different from it. Hong Kong filmmaker Jill Li's extraordinary documentary charts, for around five years' time, the hopeful rise and terrible fall of something like grassroots democracy in the small Guangdong province village of Wukan, where the expropriation of communally held lands ignited a forceful opposition to government corruption. In its intimacy and scope, I was reminded in particular of Xu Xin's Karamay (still one of the very best films I've seen over my dozen years attending VIFF). Li's film is not as artful, and its style is more frenetic and fly-on-the-wall where Xu's was above all acutely mournful, but, as a fiercely polemical extended snap-shot of Chinese society and politics, it's just as vital and affecting. If Lost Course's conclusions are inevitably pessimistic, one might find some glimmer of hope outside the frame, in the streets of Li's native Hong Kong.

Dwelling in the Fuchun Mountains Set in Fuyang, a suburban district of Hangzhou straddling the idyllic Fuchun River, currently being transformed by large-scale redevelopment projects and soaring real-estate prices, Gu Xiaogang's film attentively follows the lives of four adult brothers, their elderly mother, their wives, and children over the course of about a year. The film takes its title from Huang Gongwang's Song Dynasty-era scroll painting of the river landscape. This famous work is explicitly mentioned as the university thesis topic of one of the film's characters, who has returned to his hometown to work as a schoolteacher; he can still detect the ancient beauty and distant civilization memorialized in Hong Gongwang's painting amidst the rapidly changing twenty-first-century Fuyang. Gu, for his part, draws inspiration from the form and substance of this painting for his film's distinctive visual style, characterized by a kind of loose and open formalism. Comparisons to Edward Yang, or to the warmer Jia Zhangke of Ash Is Purest White, are entirely merited. Such comparisons speak to the level of assuredness and quiet mastery of Gu's film--almost unbelievably, a debut feature! The film concludes with the note "End of Part 1," suggesting more to follow in this engrossing family story. By its completion, I suspect Gu may well be regarded as one of the next major Chinese filmmakers.

The Lighthouse Robert Eggers' follow-up to The Witch isn't quite as flat-out frightening as his superlative debut, but it's every bit as meticulously constructed and evocative of a time and place that look, sound, and feel thoroughly strange. Despite the (potentially distracting) presence of two prominent movie stars, one quickly feels locked into the claustrophobic milieu of a remote, eerie New England lighthouse in the late nineteenth century. This transporting effect can be attributed both to Eggers' great attention to visual and aural detail and to the precision and intensity of Willem Dafoe and Robert Pattinson's performances, method scenery-chewing in the best, most entertaining sense. In its second half, The Lighthouse jumps off the rails (to the extent that it was ever on them?), deliberately mimicking its characters' descent into madness. The result is surreal and jarring; this is a "horror movie," broadly defined, in the same way that, say, Eraserhead is a horror movie. Like Lynch's classic, Eggers' new film, also shot in stark black-and-white, is plumbing the depths of some deeply weird waters (nautical pun intended). Not all of it comes together in the end--nor do I think it's supposed to come together cleanly or coherently, in contrast to the hyper-exacting quality of Eggers' mise-en-scène--making for a movie that is not conventionally satisfying, but all the more haunting for its rough edges and loose threads.

Young Ahmed The Dardenne brothers' most provocative film to date, a character study centering on a Muslim teenager in Belgium, driven through radicalization to attempt a violent crime. If Young Ahmed, on some conceptual or thematic level, is meant to measure the uneasy pulse of Western Europe right now, its greatest strength is its specificity. This is not, in execution, a general sociological portrait of Islamic fundamentalism in Europe, but of one troubled boy, who may appear demographically archetypal, yet who, in the course of his actions and reactions, emerges as a vivid, difficult subject. Thankfully, the Dardennes refuse (as ever) to play psychologists, instead allowing their protagonist to gradually come into focus through his choices and their consequences--first as a "product of his environment," but ultimately as an idiosyncratic individual, uncomfortable in his world and in his own skin. Not unlike several earlier Dardenne bros. works, this is a certain, rigorously realist type of coming-of-age film––the adjective jeune is in the title for good reason––territory the Dardennes understand better than they do ideology or religion.

Preface to a History As a longtime Vancouverite, it's a real pleasure just to see this extremely photogenic, if chameleonic, city playing itself, well-shot and up on the big screen. This remarkable short film by Devan Scott and Will Ross gives us that, as it follows one guy's long, scenic walk from Commercial Drive to English Bay after missing the last Skytrain of the night. The nocturnal rhythms of the city (so sleepy and still outside the downtown core) are perfectly captured here, and they provide the film its sliver of narrative. But these meandering rhythms are strikingly juxtaposed against Richard Evans' The Coming of the Third Reich, a sobering history of Nazism's origins in German culture, playing (as an audiobook) through the walker's headphones and over the film's soundtrack for nearly the whole route––interrupted only briefly by a phonecall with his girlfriend. I'm not sure what particular symbolic connection we should infer between what we're hearing and what we're seeing. In a post-screening Q&A, the filmmakers suggested something about the imminent danger of "global warming," but, I must admit, this idea did not occur to me at all as I watched their film. Instead, without overextending, what Preface to a History evokes so well is something quite common in life, but rarely hinted at in movies: the "ordinary affect," without conscious cognitive dissonance, of experiencing totally different phenomena at the same time, like The Coming of the Third Reich colouring an unhurried, late-night stroll around Vancouver.
Posted by Josh at 8:18 PM

And I press you to the pages of my heart


It may just be that I spend way too much time closely reading Augustine––but this lyric sounds rather strikingly like something straight out of the Confessions. Now, to be clear, I'm not suggesting that, like Blood Orange, Carly Rae Jepsen is consciously invoking Augustine. But what a strangely wonderful metaphor in a pop song that also seems to explicitly reference the True Blood theme!

In any case, Dedicated further confirms her place in the upper-most echelon of pure-pop consistency, with Robyn her only real peer, and Ariana Grande and Taylor Swift hovering, for now, just below that. The latter's Lover is nearly as resplendent, but its finest moments (including the title track and the quietly wrenching Dixie Chicks duet) sound closer to the country ballads with which she originally made her name than anything she's put out in years. She's still a singer-songwriter at heart, whose pop turn was a product more of will than nature; in another, plausible timeline, her career trajectory might have resembled, say, Lucinda Williams's or Tori Amos's. CRJ is through-and-through a crafter and performer of pure, sublime pop, like Robyn, like Kylie Minogue, like golden-age Madonna. Just occasionally, though, a note of (writerly) profundity slips in there, e.g, "And I press you to the pages of my heart."
Posted by Josh at 1:37 PM