I'm Still Not Used to This

I feel like I'm cramping Josh's style or something (though he'd say otherwise). Anywhoo. Posting time.

Remember the two Japanese fairy twins from the Mothra movie? Yeah. Well, they were also singers. Pretty great stuff, actually. If you dig the old James Bond theme songs--you'll like them. They also have some of the most endearingly creepy album covers ever: 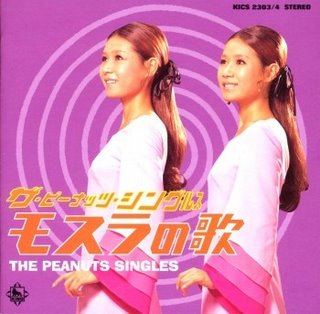 Posted by culticonic at 9:06 PM

As far as "What's Happened to Baseball (And What Does It Say About American Culture)?" think pieces go, Chuck Klosterman's meditation on the Bonds dilemma is remarkably thoughtful:

This is what makes Bonds frustrating: It's entirely possible that he views his actions more reasonably than everyone else does. When I consider the choices he made, I find myself thinking, "Why?" He was already the best player of his generation. But then I realize that my question is reflexive. The reason Bonds would jeopardize his legacy is because he doesn't view it as a legacy -- he views it as a responsibility he doesn't particularly like. Part of what makes him unlikable is that he doesn't care how other people expect him to think. Part of what makes him unlikable is the fact that he's so shrewd.

Early in "Game of Shadows," authors Mark Fainaru-Wada and Lance Williams try to illustrate what motivated Bonds to inject chemicals into his rump, and they suggest that his actions were driven by jealousy and, to a lesser extent, race. "They're just letting him do it because he's a white boy," Bonds supposedly said of McGwire's steroid-fueled run at the single-season home run mark. This statement makes Bonds seem as paranoid as Richard Nixon. How, one wonders, could unseen puppet masters be pulling the strings behind the home run race? It all seems crazy.

But, then again, nobody ever wrote a takedown book on Mark McGwire. I'm not sure anyone even considered it.

Speaking of things that are up at Stylus...
Posted by culticonic at 9:37 AM

She's Got a Rich Daddy / She's Her Daddy's Girl

File under 'Bands I Forgot Were Awesome': About an hour ago, I stumbled across an old CD wallet buried near the bottom of a drawer where I keep photos I'll look at again when (/if?) I'm collecting Social Security and magazines with some interesting article that I may or may not revisit at some indeterminate point in the future. Inside was the Misfits' Static Age.

I remember really liking this band (Danzig-era, not professional wrestling-era), and I'm not sure when exactly I stopped remembering that they kick ass. Well, it's still terrific stuff; if not in the same league as the Ramones or X or Ashlee Simpson, still better by a country mile than ninety-eight percent of what currently passes as punk rock.

It's Too Late, Nick!

So, I caught the Yeah Yeah Yeahs the other night in St. Louis. Upon reflection, I think it was probably the best rock show I've seen since the Fiery Furnaces this time last year. (Between then and now, I've seen Sleater-Kinney, the Stones, and the Strokes, among others.) Which is to say, Karen O and Co. are every bit as good live as the reputation that precedes them.

Nit-pick about who or where they draw their inspiration from if that's how you get your kicks, but the bottom line is that there's never been a frontwoman like Karen. Polly Harvey? Debbie Harry? Laurie Anderson? Gwen Stefani? Nah, nope, nein, and are you kidding? More than any performer I've seen, she really seems to be having as much fun as her audience (i.e., a lot). Songs you've heard dozens, if not hundreds, of times before sound fresher, more spontaneous, without losing any of their bite or impact. And for all the talk of new-found maturity, she still spit beer. Just for the record. Show Your Bones may have signaled a cleaner, deeper YYYs, but the new material sounds as exciting live as "Pin" or "Tick" or "Art Star" (though they passed on the folky "The Sweets," my favorite track on the new record, and the non-album gem "Down Boy").

After the show, I got to chat for a bit with guitarist Nick Zinner. Which, honestly, has nothing to do with this post. I guess I could talk about how "down-to-earth" he was (he did swap cigarettes with one guy, and neither of his bandmates turned up in the parking lot), but I actually just want to post this picture because I think it's funny.
Posted by Josh at 5:44 PM

Whatever It Is That You Do, You Do It Admirably 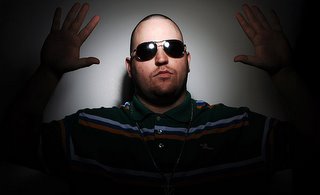 So, everyone out there wondering who I am can now know one thing about me: I'm loving "Ms. New Booty." Besides, Josh isn't going to write about it, and someone around here has to.

This song is, quite possibly, the most joyous and delightful ode to booty ever recorded. And there have been a few. Bubba's previous Southern love for boobs and fiddles has apparently been replaced with big-city ass and synth. While the fiddles are sorely missed, this infectious single mostly makes up for that. Besides, the track's "Collipark, Bubba Sparxxx!" opening is totally adorable.

Posted by culticonic at 3:28 AM

My Attitude is 'Fuck It' 'Cause Motherfuckers Love It

I actually can't argue too much with this; their #1 is absolutely spot-on, and most of the rest are unimpeachable.

For the record, though, my version goes:

So, perhaps, the Dean is still on board? Either way, this is really depressing.
Posted by Josh at 12:22 PM

Thanks, Josh. The last entry in my other blog was me saying I had "nothing to write about." Let's just ignore that, and hope I'll have interesting things to post about here!

Oh, and the Ts in JLT/JLT officially stand for Teresa now. (Okay, maybe not...).
Posted by culticonic at 7:28 PM

Hello, whoever's reading this. Teresa will now be posting here. So, if you see a post espousing the awesomeness of the Doors, send the love her way.
Posted by Josh at 7:16 PM