And This Is Crazy 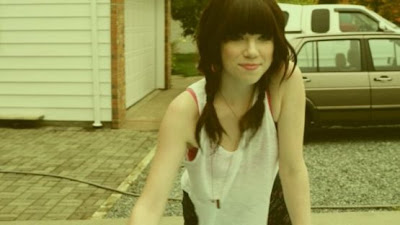 It's official: This was, in terms of music, the year that I went from kinda to almost totally out of step with the critical consenus. It's funny--when I first started getting involved with music criticism, it was still Boomer-dominated: the "old guard," Rolling Stone/Voice (seeming) lifers, et al. Now, I feel old. I didn't vote for any of the top 16 albums in this year's Pazz & Jop poll. And, more tellingly, the only one of those 16 that I considered voting for was the Springsteen record! Singles-wise, I'm less disconnected, I suppose. I voted for three in the top ten, including the landslide victor: Miss Carly Rae Jepsen's "Call Me Maybe," which is, of course, undeniable and sublime--though not necessarily one of the top five tracks on CRJ's superlative Kiss. (By the way, here is an interesting piece on "Call Me Maybe" read in relation to game theory [!]).

Speaking of great singles, I would have absolutely voted for this--to which I was only recently alerted by Teresa--had I heard it before the deadline. It's so ginormous and dramatic; and she looks more than a little like a young Cyndi Lauper (just saying). If this, coupled with the very welcome Girls Aloud comeback, is what's going on right now in British pop, this is not at all a bad state of affairs.
Posted by Josh at 3:04 AM 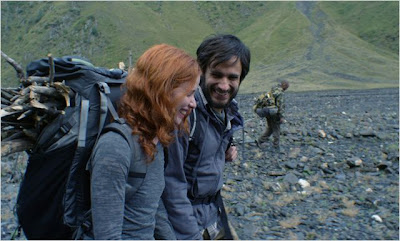 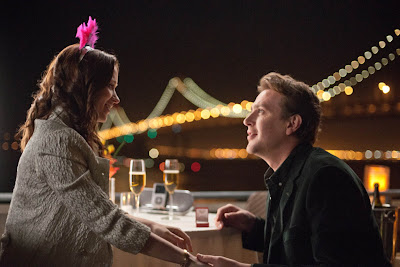 2013 promises to be a transcendent year for relationship movies (Exhibit A! Exhibit B!!). But 2012 was pretty solid, in its own right. "Relationships movies," not romances per se: Amour and The Deep Blue Sea, for instance, would hardly fit the bill for viewers in search of more standard film romance, yet both of these films offer some fairly profound reflections on the power of human relationships. The same goes for Julia Loktev's stunning The Loneliest Planet. The early stages of the narrative are more or less what one would expect from an indie love story. Scenes of slightly awkward intimacy, more quirky than sexy, are intercut with lots of hiking across gorgeously austere landscapes, as an engaged couple and their local guide tour the Caucasus Mountain region of Georgia. Then, in a sudden, unexpected moment of violence (or more accurately, the threat of violence), everything changes, albeit in subtle, unspoken ways. The film's greatest strength is that every scene that follows this troubling incident--and in retrospect, all those that had preceded it--can be read, equally validly, on an absolutely literal level, specific to these distinctive individuals and their circumstances; an allegorical level, in which the actions and reactions of Loktev's back-packing lovers and their host represent a provocative commentary on sexual politics; or on a semiotic level, given the potency and quiet precision of Loktev and cinematographer Inti Briones' ruggedly mannerist compositions. Best of all, none of these levels of analysis or combinations thereof, could yield a truly conclusive reading of The Loneliest Planet, because the film is stubbornly elusive, making meaning(s) that it refuses to ever pin down as definitive--not least, in its ambiguous final shot.

The Five-Year Engagement is, on the one hand, a decidedly more conventional relationship film: there's laughter, there's tears, there's musical montages, etc. Nicholas Stoller's movie is recognizably a product of the Judd Apatow rom-com factory. It might, arguably, in fact, be the best Apatow production to date, but--notwithstanding the aforementioned, reasonably plentiful "laughs" (foolishly incurred injuries, a faked male orgasm, Chris Parnell)--it's not the funniest. Which brings me to the "on the other hand": From the trailers for this film, one would expect something, in equal measure, wacky and fluffy, like Stoller and Jason Segel's previous collaboration on Forgetting Sarah Marshall or She's Out of My League, both fine, funny, and slight. The Five-Year Engagement is more wistful and sensitive. At times, it's legitimately sad, and in a way that feels honest and (quite appropriately) mundane, rather than engineered for maximum emotional impact. What separates this from other, similar relationship movies is that Stoller and his cast (Segel and Emily Blunt are splendid as the leads, while Alison Brie, aka Trudy Campbell, steals every scene she's in), true to the title of the film, capture a real sense of time passing--and what the passage of time means for these characters, and for relationships, more generally. The episodic structure works well comically, but it also serves to express how a relationship's rough stretches, as much as (or sometimes more than) the good times, can make a partner all the more dear and uniquely irreplaceable. If it's a cliche that distance makes the heart grow fonder, it's a truth that has rarely been demonstrated so poignantly on screen. When the film arrives at its happy ending, it's as well-earned and satisfying as it is pro forma. And, fittingly, it doesn't feel at all like an actual end to the story of these two interesting, changing people. Both The Loneliest Planet and The Five-Year Engagement reject a too-common cinematic view of relationships as finite trajectories, in which the bumps of the metaphorical "journey" are retroactively smoothed over by the inevitable "destination." Loktev and Stoller, instead, present portraits of relationships as unpredictable, ever-dynamic, negotiated things, at once, fragile and durable, strange and natural.
Posted by Josh at 3:02 AM