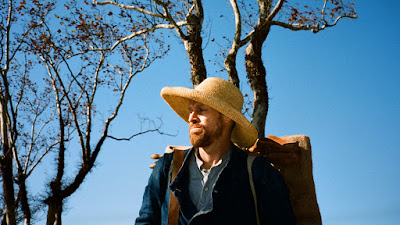 I've seen so many more terrific performances since posting this list that I've decided to update, and double, it. Insofar as I care about the Oscars, I'm decidedly bummed that Ethan Hawke was snubbed, but pleasantly surprised that Willem Dafoe made it in, for one of the best performances of his career (possibly the best). At Eternity's Gate itself –– beautiful and indelible but marked by some deeply odd and questionable technical choices –– warrants more careful consideration (I just finally saw it) and extended discussion, which I'll get around to soon...
Posted by Josh at 10:53 AM 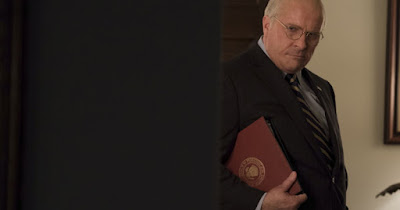 Vice is a bad movie about a very bad person. Because Adam McKay's film is sharply critical of its subject does not make it a good movie. It is obvious, clumsy, admittedly sporadically entertaining, but most of all, bizarrely incongruous, its many moveable parts shoehorned into a film that as a whole is barely coherent. On the one hand, its dramatic scenes feel like the stuff of a highly conventional, super-reductive biopic, a key-moments collection of Cheney's life and career, with every major decision or event compressed into the fewest number of synoptic lines possible before jumping to the next such moment. On the other hand, this series of dramatic scenes–––arranged elliptically so as to ostensibly explain who Cheney is, or what really motivates him, or whatever––are framed by a sub-Michael Moore narration–commentary that is more heavy-handed and condescending than your average left-wing conspiracy-theory amateur doc posted to YouTube; the choice to have Landry from Friday Night Lights break the fourth wall in delivering this narration was utterly ill-considered, and the scene where it's finally revealed who this narrator is in relation to Cheney's story is downright cringeworthy--arguably the dumbest movie-moment of the year if not for the scene with Alfred Molina as a waiter, which is somehow even dumber. Whatever dramatic impact Vice might have otherwise made is thoroughly undermined by McKay's lame stylistic choices.

This is a bit of a shame because some of the film's performances are quite strong, at least as uncanny impressions or amusing takes on well-known people. Christian Bale is eerily dead-on in the same way as Gary Oldman's Churchill, Meryl Streep's Margaret Thatcher, and Jamie Foxx's Ray Charles. Amy Adams is also good, if basically one-dimensional (though, curiously, her performance is at times more reminiscent of Kate McKinnon's Hillary Clinton than it is of Lynne Cheney). Steve Carrell's performance works because he hones in on a particular, distinctive aspect of Donald Rumsfeld––his impish petulance––and essentially plays him like a smarter, more evil (if no more socially adept) Michael Scott. Tyler Perry's Colin Powell and LisaGay Hamilton's Condoleeza Rice are fun, one-note touches. Sam Rockwell's George W. Bush, however, is shitty and lazy, impression-acting at its worst that dampens the scenes he shares with Bale, Carrell, et al.

As a piece of pop-polemic, Vice shares a certain cultural space with BlackKklansman, my pick for 2018's best movie. Both films blur the line between past and present, and combine fast-paced popcorn entertainment with explicit political critique. Yet, the qualitative difference between these two films could not be more extreme. It's not just the difference between a great filmmaker and a mediocre one, though that's part of it. It's that Spike Lee earns his film's incendiary coda and its presentist nods along the way with rich, sensitive storytelling; interludes like the Birth of a Nation sequence deepen, rather than distract from, the main drama. A pleasurable movie narrative ultimately gives way to profound despair and anger, and both feel wholly warranted. By contrast, Vice aims squarely to shoot fish in a barrel, and in some respects it fails even at that. When it attempts something like profundity, it feels like a ridiculous self-parody of the twenty-first-century American left.
Posted by Josh at 1:02 PM

Secrets stolen from deep inside

Damn! Even better than "Pinot Noir" and "Boobs in California," though perhaps not the one-man geisha opera.
Posted by Josh at 10:00 PM