For the first time in several years, I've revised and updated my top 100 movies list. I prefer the vague "top" because this list, as it stands, is some imprecise mixture of favorite films, films I admire the most, films that move me the most, films that really stick with me, films that I never tire of revisiting, films that remind me why I love this singular/composite art-form as much as I do. Inevitably, some of my favorite filmmakers are represented with numerous films, while other great filmmakers and even entire genres are barely (or not) represented at all--not because I don't appreciate their films but only because one hundred is a very limited number and this is just a personal list with no pretense to completeness or evenness, and it would no doubt look at least a little different if I posted it tomorrow rather than today.
Posted by Josh at 9:49 PM 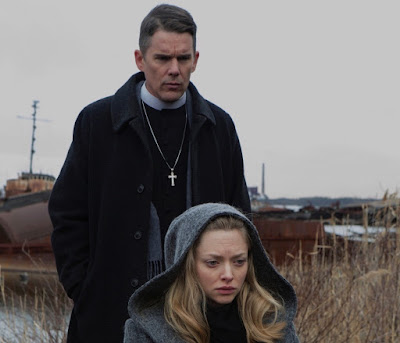 The three best films I've seen so far this year all centre on middle-aged men experiencing physical-cum-psychological breakdowns while on personal missions of one sort or another. I'm not sure whether this says more about the state of arthouse cinema in 2018 –– deliberately anti-superhero movies? –– or just about the state of my idiosyncratic tastes and preferences. Lucretia Martel's Zama is the most beautiful, the most open and immersive, and probably the best of the three. Lynne Ramsay's You Were Never Really Here is the most sealed-off and cryptic; despite my admiration of the film and especially of Joaquin Phoenix's performance, I can't claim to be able to make heads or tails of it.

Paul Schrader's First Reformed is the darkest and most upsetting, not least because Schrader casts a superb Ethan Hawke (one of my favorite actors, though I can scarcely separate him from Jesse in the Before... trilogy and the dad in Boyhood) as his suffering leading man. First Reformed really feels like the culmination and apotheosis of all things Schrader–-not just his own filmography as a screenwriter and/or director (this is obviously of a piece with Taxi Driver, Hardcore, Last Temptation of Christ, Affliction, etc.) but also his influential work as a theorist of film style, with unmistakable echoes of Bresson, Dreyer, Bergman, and Laughton's Night of the Hunter, among other key touchstones. Occasionally, these cinephilic references are a slight distraction (more often, they're effective), and in certain places, Schrader's film feels a touch too allegorically schematic or politically on-the-nose. But its flaws in no way lessen its total, seismic impact. Rather, a subtler, more elegant, more "perfect" version of this film would not be as flooring, and despairing, an experience. It's some kind of peculiar masterpiece.
Posted by Josh at 11:02 PM


This is utterly fucking revolting. It's unfortunate that we exhausted all the relevant (historical and contemporary) analogies two years ago –– or, hell, maybe back during the second Bush administration –– because now this irredeemable scumbag is writing about immigrants "infest[ing]" the U.S. while creepily hugging a flag and sending children off to detention camps. Each time you think things can't get worse, they do.
Posted by Josh at 11:41 AM