Just What I Was Feeling at the Time 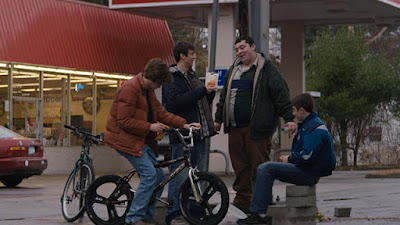 01. The current NBA season I honestly can't remember a more thoroughly enjoyable time to be an avid pro basketball fan, in terms of the enormity and diversity of talent league-wide, interesting teams, brewing rivalries, and, as a bonus, the bountiful supply of high-quality writing available on All Things NBA, from general profile pieces to stats-heavy analysis to in-depth reports on PB&J preferences. Also, for last night's Raptors/Hornets game, Drake joined the on-air commentators for the entire 2nd half (minus a washroom break)! After the game, he even interviewed Kyle Lowry!

02. Super Dark Times I like Stranger Times plenty and found the new IT much better than expected. But this minor-key masterpiece is a perfect antidote to the resurgence of the cute, clever group of preteen/teenaged boys riding around suburbia on their bikes genre, as, by contrast, these teen boys are much more realistic and naturalistic: kind of dumb, awkward, and gross, not either angelic figures (as in Gus Van Sant, though there are good aesthetic comparisons to be made with Paranoid Park and, to a lesser extent, Elephant) nor lovable, wisecracking misfits engaging in precocious rapport that's funny yet ultimately reassuring to adults. And while it's set in the mid-90s, and does a good, relatively subtle job of evoking that time (when I was about the same age as these kids...), it's not awash in rose-colored nostalgia or rapid-fire period references. It's really one of the best, and most disturbing, dramatic representations of (white, male) teenaged awkwardness and anxiety I've ever seen. It left me shook!

03. On the Beach at Night Alone Hong Sang-soo's latest is one of his very best and Kim Min-hee's performance might be the most impactful I've seen all year; in retrospect, this makes me appreciate Claire's Camera more, as a kind of de facto companion piece.

04. Low in High School Better than World Peace... and Years of Refusal, hence his best in a decade-plus. Roughly half of it sounds surprising (in mostly good ways), the other half sounds exactly the way diehard Moz fans want it to sound.

05. Utopia Fewer surprises (though some), but never ever dull. She remains incapable of making a less-than-very-good record.

06. She's Gotta Have It We're only two episodes in, but this feels like a direct equivalent to Twin Peaks: The Return: Netflix clearly gave Spike Lee the same free rein that Showtime gave Lynch, and the results feel like the maximum-possible iterations of their respective aesthetics.

The year's most important piece of film criticism is also one of the best essays on Culture Right Now, full-stop.
Posted by Josh at 1:14 PM