You know the drill: click the above image for the mp3, or use this subscription link. Enjoy the 'cast, which Josh has called our "best yet," while I think #3 is still slightly better. Decide for yourself.

Another big shoutout to astor, for hosting all of these.

Posted by culticonic at 2:33 PM

What You Know About That

Brief notes on some recent viewings in roughly descending order:

Duck Season Fernando Eimbcke's debut feature isn't shot in black and white merely to be appear more superficially artful; it's rather a more pointed aestheticization: This is a memorialization in the present tense. Effectively harnessing that tonal paradox, the film succeeds as an ode to quotidian pleasures, where filling a couple glasses to the brim with Coke packs the bittersweet punch of fleeting innocence. Every bit as charming as you've heard, without ever stumbling toward preciousness or forced whimsy.

ATL At the risk of unfair subgenre ghettoization, this is only a hip hop movie insofar as it stars a pair of rappers. Instead, it's a surprisingly sweet seriocomic look a class friction, boasting a light touch and a sharp eye for regional specificity. T.I.'s good. Big Boi deserves Oscar consideration.

Idlewild Here, too, Big Boi is best in show, but, save maybe a better-than-decent Terrence Howard, the rest is a half-baked mess. Think: Purple Rain meets Moulin Rouge, sans the former's classic soundtrack (some Aquemini or Stankonia material could've livened things up considerably) or the latter's sporadically exciting stylistic flourishes; "eccentric," to be sure, but more as a backhanded compliment.

The Illusionist Right, this is one those prestige-tinged period films where American movie stars speak English with foreign accents. It looks great, but so does most of the Merchant-Ivory catalogue. I'd have given it the benefit of the doubt as a metaphor-for-the-magic-of-movies piece had it not opted for superfluous explanation in a tacked-on epilogue.

Brick If you still thought Memento was great after the third go-'round, this is for you. Same goes if you've privately longed for a Big Sleep remake with the kid from 3rd Rock from the Sun in the Bogey role. Otherwise, do yourself a favor and stick to Hawks and Huston.

Duane Hopwood As one of the few people who actually liked The Pallbearer, I had some hope for this one (which we rented randomly after being unable to agree on other picks). Matt Mulhern's movie resides firmly in the wasteland of Amerindie mediocrity, inoffensive and uninspired. In a nutshell: Ross Gellar moves from the city to the Jersey shore, marries Janeane Garofalo, has a couple kids, drinks heavily, gets divorced, loses visitation rights to said kids due to said drinking, and--surprise, surprise--rediscovers himself. Not as heartwarming as it sounds, but maybe not quite as awful either.

Dead Man's Shoes What starts out a British gangster flick, with some idiosyncratic appeal, evolves discomfittingly into your standard-issue revenge drama, with scant heart, less brains, and the usual dubious moral implications.
Posted by Josh at 9:12 PM

I've got a piece on Eyes Wide Shut for Stylus' Scenes column up today.
Posted by Josh at 2:05 PM

Every Big Girl Needs a Big Pimp
This weekend, we watched some movies. All first viewings for me, so here's what I thunk: 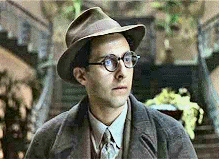 I quite liked The Big Lebowski and O Brother Where Art Thou?, but loathed the grating attempts at humor found in Fargo, and think Intolerable Cruetly to be dull. Those were the only Coens I'd seen to date, so my average opinion of them was evened out to a nice, solid, "eh." But after hearing favorable things about Barton Fink, and realizing that John Goodman is in it--I watched. And I liked. Here the Coens find a happy ground of comedy that works for them: black, over-the-top, and period-satire. John Turturro plays an Arthur Millerish playwrite, hired by Hollywood bigwigs to script them a wrestling picture. Against his better judgment, he goes. There, he's set up in a seedy hotel, plagued with a nasty case of writer's block, and slowly becoming more and more unhinged with each zany occurence. The film is entertaining, witty, and not at all patronizing (ahem, Fargo). Plus, it's--unexpectedly--a pandora's box of mystery at its core, and I still haven't figured all of it out.

Despite flying rather lowly under the rader (I'd never heard of it), having a severely boring trailer, and an even more boring DVD case--I wanted to see this, pretty badly. Besides, don't judge a book by its cover, right? Not to mention all the good things Josh had to say about the movie. A skewed period piece about a gal, lacking in emotion, but with acting ambition in spades--and something about said gal eating glass? Sign me up. Problem is, that synopsis is much more interesting than both the film and the gal. Esther Kahn--even if you forgive the cheesy circle fade-ins, Oliver Twist-esque voiceover, Summer Phoenix's hammy accent, or the uninventive actress-who's-lifeless-until-on-stage plot--is, in the end, a very mediocre work. Visually, it is rather aesthetically pleasing, considering it's set amongst poor Jewish immigrants in 1890's London (not a very glamorous time). There are also some moments of (possibly unintentional?) humor, that made the whole endeavor that much more enjoyable. And Phoenix--accent aside--was good, given the...er, challenging role. Okay, I'm out of nice things to say. Even the glass-eating was brief and unsatisfying. All in all, Esther Kahn's biggest crime is being as slow, uninvolved and cold as its title character. 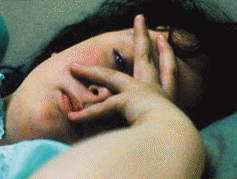 Fat Girl is a movie I never hear people talk about. I'm sure they do (...talk about it), I'd just never noticed. I'd heard the title, of course, and seen the Criterion cover. Somehow I pictured it being made in the 70's, and the fat girl being evil or menacing. I realize as I type this, I was probably getting it confused with The Honeymoon Killers (1970), which also features an obese female, and is on Criterion. But I digress. Catherine Breillat's film is French, came out in 2001, and the girl whom they call "fat" is actually kinda sweet and unassuming. I know that now. Nevertheless, the film is very disturbing--not unlike, I imagine, The Honeymoon Killers. But I digress, again. Anais (yes, the heavy lass) is on vacation with her mother, father, and decidedly not-fat sister. She watches, quite literally, as her sis meets and is ultimately seduced by an older Italian dude. Or, to put it as our Asian import DVD case does: Indeed, this is the subject: a girl's loss of virginity. I guess I can't argue with that. Fat Girl isn't ever easy to watch, but it's always compelling, frame for frame. And that closing shot is killer. In a very bizarre, almost funny (okay, not almost) way. That's the best kind, no?

I'm not typically a big fan of trendy, smarter-than-thou comedies--but this one has some odd charm to it. Maybe it's the cast, maybe it's the director (David O. Russell), or, hell, maybe it's the existential-philosophy-hogwash subject matter. Either way, it makes for an enjoyable little diversion that pulls of quite a few laughs. Sometimes those laughs are underwhelming, and sometimes the intended laughs don't quite make it to the punchline, but more often than not, it's harmless, slapstick fun. My only real complaints with I Heart Huckabees (banking on the heart-symbol trend a little late) are that it could stand to shave off twenty minutes, and at times it becomes a tad too nonsensical. Really, though, can you dislike a movie that references Jessica Lange, Shaquille O'Neal, Shania Twain and the Dixie Chicks (all but one of those at fairly random moments)? I sure can't.


Oh, and while I'm here, I'll say: R.I.P. Steve Irwin! This is all the more creepy given that I very recently watched Grizzly Man, and the comparisons there are not subtle.
Posted by culticonic at 6:35 PM Movie romances come in all shapes and sizes, to be sure, from Rick and Ilsa to Jesse and Celine. Few, however, are as eerily imagined as Shinya Tsukamoto's Vital, which I finally caught up with on DVD (as half of a double bill with one of my personal favorites). In fact, the two films I was most reminded of while viewing Tsukamoto's creep-cum-swoonfest are Vertigo and Steven Soderbergh's Solaris remake, both ghost stories shot through with romantic longing and existential dread.

Vital stars the ubiquitous and consistently impressive Tadanobu Asano as Hiroshi, an amnesiac medical student who progressively realizes that the cadaver he's dissecting is none other than his late girlfriend, Ryoko. While engaged in some sort of relationship with a classmate equipped with issues of her own, Hiroshi's memory begins to return in fits and starts. Meanwhile, Hiroshi and Ryoko come to share some strange tropical space located somewhere between memory and the afterlife. She repeatedly performs a bizzare, contortion-based dance and begs her still-living lover to stay; he wakes back up and hovers blankly over the autopsy slab.

Trust me: It plays better on screen than on paper, though that isn't to deny the film's weird as hell. This is inherently disturbing stuff, but it's also uncommonly passionate and stylistically entrancing, shot largely in cold, color-neutral locales that intensify the claustrophobic mood. I've never seen anything quite like it, and I can't shake it for the life of me. Outside of some choice Kitano, Miike, and Kiyoshi Kurosawa, I'm woefully ignorant of contemporary Japanese cinema. Vital has officially peaked my interest to delve deeper.
Posted by Josh at 9:20 PM

On Playgiarism
Posted by Josh at 11:07 AM